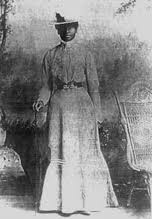 Mary Elizabeth Boswer was born in the time period of 1839, in Richmond, Virginia.  Mary was born as a slave for the Van Lew family. Her slave owner, John Van Lew, was a wealthy hardware merchant. John Van Lew died in 1843, and Mary and other slaves were freed by Elizabeth and Elizabeth's mother. Even though Mary was freed, she still continued to work for the family as a free, paid servant. Elizabeth Van Lew sent Mary to an African American Quaker school, in Philadelphia. Mary had to return back to Richmond when the Civil War tension began in 1860.

Before the war started, though, she was married to a free black man, William (Wilson) Bowser. William and Mary were married four days after the Civil War began. Their wedding ceremony was unusual because they were married in a church that only the white and wealthy people went to. The cou ple never had children. In the records recorded of Mary and William, it never stated that they got to see each other in the time of the Civil War. After the Civil War there was also no records on where the couple moved.

At the beginning of the Civil War on April 12, 1861, Elizabeth Van Lew asked Mary to be a spy to help the Union. Elizabeth couldn't take on the task by herself because she was supposed to be an important member of Richmond, but only because of her father's wealth and status. Elizabeth was a spy but also she helped the Union by saving the prisoners and helping them escape.  Mary agreed to help Elizabeth out and started to work for the Confederate White House. She worked there until right before the end of the Civil War.

When Mary started to work for President Jefferson Davis and his wife she had to change some things. First off, she had to change her name to "Ellen Bond" just so no one would know her actual identity. Then before she actually started to work she had to remind herself that she was going to be a slave again. Mary was used to be treated with proper respect and like the intelectual that she actually was. But when she went to the Confederate White House she had to pretend to be unintelligent, and act like she didn't understand what they were talking about so she could get information on the Confederates and their plans to attack the Union. Ellen Bond (Mary Bowser) was considered  "dim-witted, also slightly crazy, but able servant" to the president and  his wife.

Mary couldn't get the information that she needed if she only did her job. While she cleared the dishes or cleaned the kitchen she had to listen in on the conversations about troop strategies and movements. Also when she cleaned up around the Confederate White House she would go into President Jefferson Davis' office and look through the letters and other paper work on his desk. Mary had a very good memory so she would report what they said or what she read, word for word to either Elizabeth or a new messenger, Thomas McNiven.

Thomas McNiven was a baker that would come to the Confederate White House often to sell baked goods. Every time he would come by Mary would go out to the wagon and exchange the information while he gave her the bread. Thomas would go and tell Elizabeth the information that Mary told him. Mary was different from most of the other slaves at that time because she could read, understand the conversations, and write. Mary was an important asset to the win of the Union.

President Jefferson Davis noticed that there was a leak in the Confederate White House, but he didn't suspect Mary until the very end of the war. When she knew that Jefferson knew she was the leak, she fled the White House on January, 1865. As one last attempt to help the Union, she tried to burn down the Confederate Capitol, but was unsuccessful. After the war there was no record of their life or death of Mary or William Bowser. The federal government burned all of the records of southern spies. The files included Mary Bowser, Thomas McNiven, and Elizabeth Van Lew, so that is why some of the details are missing in all of their histories.

In 1995, Mary was honored by the U.S. Government for her efforts in spying. She was inducted in the "U.S. Army Military Intelligence Corps Hall of Fame" .

What was said at the ceremony

"Ms. Bowser succeeded in a highly dangerous mission to the great benefit of the Union effort. She was one of the highest placed and most productive espionage agents of the Civil War. [Her information] greatly enhanced the Union's conduct of the war. Jefferson Davis never discovered the leak in his household staff, although he knew the Union somehow kept discovering Confederate plans."